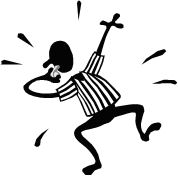 The debate over not using neutral referees and Judicial Officers has again reared its head after an incident in the dying minutes of the Waratahs v Sharks match, and a dangerous tackle in the Chiefs v Reds match in Round 4 of the 2010 Super 14

The referee in question was Australian Paul Marks, who was assisted on the sideline by two of his Australian counterparts. The game had less than 5 minutes to play and the score was close, with the Waratahs leading by a slender 4 points. The Sharks were on attack in the Waratahs half when Stefan Terblanche made a linebreak. He was almost at the 22m line when he threw a pass to his right, aiming to connect with his unmarked No 8, Ryan Kankowski. The try was on for all money, with Kurtly Beale the sole defender between Terblanche, Kankowski and the goal line 24 metres away. Even the commentators were anticipating Kankowski running in the winning try, such was the lack of cover defence and Beale caught in no-man’s land between the two Sharks’ players.

But as Terblanche threw the perfectly weighted pass, Beale reached out a hand and slapped the ball down. The referee immediately blew the whistle and, after a quick consultation with his assistant on that side of the field, was in no doubt that the ball had been deliberately slapped down and a professional foul had taken place. Beale was subsequently yellow carded out of the game, but as he trudged towards the sideline Paul Marks awarded a penalty to the Sharks – much to the chagrin of Terblanche and his team mates who were demanding a penalty try.

If a player would probably have scored a try but for foul play by an opponent, a penalty try is awarded between the goal posts.

In this situation it was obvious to all that try would probably have been scored, and given that the pass was good and the receiving player (Kankowski) is a No 8 with all the speed and ball handling skills of a back in the ilk of Daniel Carter, Ruaan Pienaar or Matt Giteau, it’s pretty safe to say that other than rupturing his achilles he would definitely have scored the winning try. Given the referee and his assistant both agreed it was foul play and they dished out a yellow card for the slap-down offence, the question remains as to why a penalty try was not awarded. One can only hope that the referees’ new grading system will address this major blunder and that Marks is stood down for at least one round – a stand down that seems appropriate given an assistant referee was stood down for one round after making a mistake with a touch call that did not have as significant a bearing on the eventual outcome of a game in Round 1.

Meanwhile, Chiefs prop Arizona (Sona) Taumalolo was been found guilty of a dangerous tackle on Red’s first-five eighth Quade Cooper, 11 minutes into the first half of the game between the Chiefs and Reds following a citing after the match. New Zealand’s Judicial Officer Peter Hobbs considered evidence from the player, video recordings, and after hearing submissions from Taumalolo’s representative deemed that while Taumalolo’s tackle breached the laws of the game, his overall culpability did not warrant any further penalty in this case. I find this somewhat incredible, given that the replay of the tackle (missed by the referee) showed a distinct lack of technique and was close to a swinging high arm, not to mention late. Had it been spotted at the time by the referee and his assistants I have no doubt it would probably have resulted in a yellow card for Taumololo, but he got away with it. Would he have received a suspension had this case been heard in Australia or South Africa? I rather tend to think he would.

There is no reason not to have neutral referees or judiciaries if they are all working off the same song sheet. The problems arise when there are major blunders such as the non-penalty try on Saturday night that change the outcome of a game. Unless there is a penalty imposed upon referee Paul Marks for his incorrect adjudication of that incident, the need for neutral officials both on and off the field will remain an issue for the Super 14.