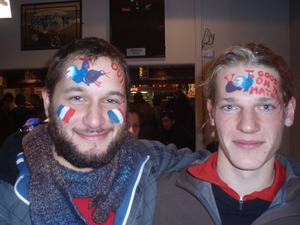 It’s been a few years now since so much interest surrounded the June test series in New Zealand. Where previously understrength teams have been sent from the UK and Europe posing as “warm up” tests for the TriNations, this year a relatively strong French squad winged their way down under minus just a few top players from the two sides battling out the French championship. Despite the New Zealand TAB having them at ridiculous odds to win the first test, the French got up and won – and in the process highlighted some serious shortcomings in the All Blacks’ game.

Obviously my memory has more elephantine properties than those of the All Black coaching trio, because when I think of France it brings back memories of Eden Park in 1994, Twickenham in 1999 and Cardiff a mere two seasons ago in 2007. All were games where the French pack fronted and didn’t allow the All Blacks to get decent possession or territory, and where their backs managed to race away and score tries against the run of play to win the game. I’m always edgy and nervous when we meet France, and last week just confirmed why.

While what the French did wasn’t any great surprise, for me it was how the All Blacks appeared to have planned to play the game. Injuries aside, even if we’d had our top players the game plan we endeavoured to employ in Dunedin was fatally flawed in two key areas:
1. Attempting to play expansive rugby from first phase in your first outing of the year on a June night in Dunedin
2. Not committing numbers to the breakdown against a big French pack who were putting two players in to every one of ours

Last week I said “It will be imperative for seasoned forwards such as Woodcock, Hore and Thorn to lead the way and ensure the hard yards are put in to allow a loose trio that has only played one test to function as a combination”. The only change I will make to that statement this week is subsituting Keven Mealamu’s name for the injured Andrew Hore. Tony Woodcock and his fellow prop Neemia Tialata will know they failed to front in the first 40 minutes of the test last week, so the acid is on them to up their workrate and hit as many rucks as they can.

With yet another new loose forward trio, the balance this week is improved on last week with specialist opensider Tanerau Latimer taking the place of Adam Thomson who suffered a broken hand. Kieran Read moves to No 8 and Jerome Kaino has recovered from injury to take over the blindside flanker role, to give the All Blacks a fetcher, linker and ball carrier respectively. But these three will only be able to perform if the tight five front up – the last thing we want is to have our loose trio and backs buried in the ruck, then look up to see the mis-match of French backs running against our front rowers.

The All Blacks attacking lineout worked well last week, but defensively showed frailties against stopping the rolling maul. There are two camps on whether you should or shouldn’t contest the opposition throw – I’m firmly in the “contest” camp, particularly if you’re lacking the skills to halt a rolling maul. The problem I have with the way the All Blacks form up on static defence against an opposition lineout throw in their 22 is that they don’t read where the throw is going as well as they do when they attempt to number up for the contest. You only have a split second to sack the ball winner when his feet touch the ground, and if that moment is lost then it’s virtually impossible to stop the initial momentum of a rolling maul.

More variation will be required in the All Blacks lineout throws this week, with Isaac Ross calling mainly to himself last week the French will have worked on how to disrupt that ball. Kaino and Read should provide alternate targets at the back of the lineout, and employing the short lineout may prove worthwhile if the weather conditions are wet and windy.

While there were some mutterings about the All Blacks kicking game last week, I go along with Wayne Smith’s comments that a kick is only ever as good as the chasers. Cory Jane showed why he is an All Black last week, with plenty of work off the ball and good chasing. The return of Conrad Smith should both steady the midfield and provide some extra leadership. Jimmy Cowan needs to exert some authority on the field and get his forwards working harder if he feels he’s not getting good clean, front-foot ball to work with.

There is limited experience off the bench this week, with two new caps in Aled de Malmanche and George Whitelock, so I’d like to see the All Black coaches back their starting fifteen and only make changes should injury or performance demand it.

Meanwhile French coach Marc Lievremont has made three changes to the starting lineup that beat the All Blacks in Dunedin last week. With the arrival of the players from the French championship side Perpignon he has named Maxime Mermoz at centre in place of Mathieu Bastareaud who moves to the bench, while Nichoals Mas replaces tighthead prop Sylvain Marconnet who is omitted from the squad completely. Sebastian Chabal starts at lock this week, flankers Damien Chouley (Perpignan) and Remy Martin (Stade Francais) come onto the bench.

This test match should prove irresistable viewing, with France sniffing a test series victory in New Zealand that hasn’t been repeated since 1994, while the All Blacks will be looking to prove that last week was just a blip and that normal transmission can be resumed. The formula is easy – commit players to the breakdown, play as a team not individuals, don’t play behind the advantage line, and don’t allow the French to get their tails up. Implementing that formula has just got that bit harder after last week.