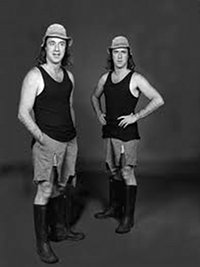 Following the surprise announcement of their robot ref, Kev Dagg and Neville Shepherd have been invited back by Haka to share some of their views on the coming week of exciting Rugby World Cup action.

Nev: We’re betting that, if you’re an Aussie fan, you’d be as sick as a dog that fell in the sheep-dip after seeing your team tipped up by Ireland like that.

Nev: Steady Kev. You ever seen a humble Aussie?

Kev: Good point. Anyway Genia and Cooper got done up like a dinner and a lot of folks this side of the ditch are saying ‘about time’. Looks like our Aussie cousins are going to meet South Africa in the quarters and to be honest I don’t fancy their chances there.

Nev: Could be dog tucker.

Kev: But never write those underarm bowlers off. If they get Pocock back, get the Doc to extract Digby’s thumb from his backside, teach O’Connor to kick, and really put it together they could win that and no mistake. Trouble is, a pack which couldn’t out-scrum Ireland has to get the wood on the Bokke tighties.

Nev: About as much chance of that as England players understanding The Laws. Did you see that rubbish with Georgia – what was that Kaplan joker on, valium? How many ruck penelties did he need before fishing the yellow plastic out?

Kev: Yeah that was slack. You had to admire those Georgia lads though. Hard yakka turning out to play the Poms four days after the Jocks eh? But they got stuck in alright. Some sore Pommie bodies after that one even if they did win.

Nev: So we reckon that, as usual, the Poms will play like the brown stuff on my milking shed floor but win their pool. I see in the papers they’ve already had their traditional crisis meeting where they ask each other what the bloody hell is the go with all the penalties, and then remember it’s because of the intentional cheating.

Kev: And having cleared that up they’ll come out and cheat at international standard instead of club standard and get through to the quarters and then the semis.

Nev: But that’s looking a bit too far ahead. The match of the round this week is going to be Scotland v Argentina without a doubt.

Kev: Yes it’s a do or die game this one. We fancy the Jocks to shade the Argies and put themselves in line for the pool runners up spot there.

Nev: Yeah they’ve banned bagpipes and lumped them in with those.. what’re they called Kev.. vulvazeelas?

Kev: Something like that. That’s like waving a tartan kilt at a jock that is. We think that’ll fire them up enough to get them through, whilst at the same time we do appreciate the absence of strangulated cat noises on the terraces.

Nev: England are facing off against Romania which should knock a few more dents into them. Those Romanian forwards are big units and that’s a fact. A tight first half and a Pom win by 3-4 tries by the end on that one we reckon.

Kev: The boys are playing France but we’re picking the Frogs to play it coy as usual. They’ll keep their powder dry, field a weak team, lose handsomely and not care a jot because they were always aiming to go through second so why get their perms in a tangle.

Nev: What about our lad Zac? Hung out to dry for having a few too many after the win in Auckland and the loss in Brisbane.

Kev: Would never have happened in Pinetree’s day.

Nev: Though I think most of the others might have got dropped for not drinking enough.

Kev: There is that.

Nev: Just to wrap it up, the rest of the games are pretty much business as usual stuff as far as results go, but we’ll be expecting more good footy to be played in all of them.

Kev: Yep, that’s one thing we’ve been served up plenty of this World Cup!

Thanks to Kev and Nev for that interview, and we’ll be back to hear more of their thoughts next week.