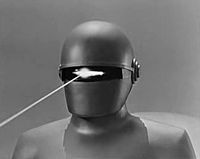 In a shock revelation it has come to light that one of the referees at this World Cup is a robot, developed specifically to provide what the makers term ‘a bit of a leg-up’ for the All Blacks.

At their invitation I went to interview South Island farmers Kev Dagg and Neville Shepherd.

PW: ‘Well we’re all quite taken aback by this obviously. What made you do it?’

KD: ‘It was that quarter-final in the last lot – the one that the ref lost for us by missing the forward pass. We decided we’d like a referee in our comp here, who was doing unto others as we got done unto us.’

PW: ‘So you built your own referee?’

NS: ‘Yeah, I had a few old tractor parts and Kev had moved over to dairy and had miles of number eight spare.’

KD: ‘The prototype looked a bit like a tractor tangled up in a fence, but a bit of midnight oil and a visit to the local.. ah.. body-shop got it looking cracker.’

NS: We were going to call it ‘R2D2′ but we thought that might give the game away.

KD: ‘Yeah the players we tested it on kept on shouting that. Bollocks ref, you can’t.’

NS: ‘It referees a footy game, but with a few differences from your normal ref.’

KD: ‘Yeah, we’ve programmed all the footy Laws into it, but added a lot of randomness to how it blows the whistle at rucks and scrums.’

NS: ‘Those were the two areas we thought we could get away with. Not even the players know what the hell is going on there, so nobody would be the wiser.’

KD: ‘We modelled it on the sheep’s brain, which has the bloody thing running in one direction then the other at the drop of a hat depending on whatever sounds it hears or whether lots of its mates are running about.’

NS: ‘That’s right. Bit of a problem stopping it shitting all over the paddock every five minutes. We’ve sorted that out.. probably.’

PW: ‘Fascinating. And you say it’s actually been reffing in the Cup already??’

NS: ‘Yep. Obviously we can’t give away which games or the powers that be would give it an early shower.’

KD: ‘Let’s just say that one of the teams got so hot under the collar their jersey numbers were peeling off, and the other one we targeted was Australia.’

NS: ‘Because of the under-arm bowl.’

PW: ‘Righto. And your robot ref is registered as a New Zealander, so it can’t referee the All Blacks?

So there you have it. The Cup is harbouring a robot referee, undercover as it were, and silently undermining the chances of the All Blacks’ opponents. If you can spot which one it is, then please let us know unless your name is Robbie Deans.