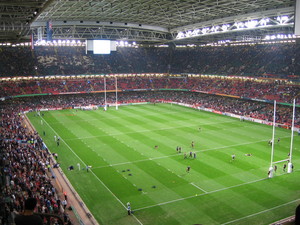 The usual analysis of the All Blacks game,including First 3 to the Breakdown, ball carries, tackle stats, penalties conceded, turnovers, the lineouts, and scrums. Daniel Carter’s first penalty goal took him to 1179 test points to overtake Jonny Wilkinson’s record, and he ended the game with 1188 points. Brad Thorn played his 50th test match.

Please note Completed Tackles means that player actually brought the ball carrier to ground (ie. halting the movement and being the tackler according to the laws of the game), not assists in the tackle situation which are tallied separately. Missed tackles also includes slipped tackles where the ball carrier isn’t stopped. Most importantly, I do NOT call a slipped tackle a tackle, it gets noted as a missed tackle.

Numbers in brackets are the first half/second half breakdown for each total. An asterisk denotes a player who came on as a substitute.

Substitutions were: Braid for Read at 35 min, Boric for Whitelock at 55 min, Afoa for Franks at 63 min, Hore for Mealamu at 75 min, Ellis for Cowan and Donald for Carter at 77 min.