This page only exists due to enquiries and interest expressed in the origins of ‘The All Blacks Haka’ way back in 1995, in the rugby newsgroup r.s.r.u and via e-mail. Since there seemed to be a large number of people who wanted to know more I decided to provide a web-page on the subject based on the excellent book Haka! The Dance of a Noble People, by Timöti Käretu, of The Maori Language Commission.

In what follows, you can read about what ‘haka’ actually is and what it means, as well as the many different styles of haka. Also, focussing on Ka mate, the haka performed by the All Blacks there are a few paragraphs on its origin, a translation of the words, and a brief description of how it relates to rugby. Finally there is a bibliography for further reading and links to a couple of related websites.

The Maori people have always excelled in the art of haka, which is the generic term for Maori dance. Henare Teowai of Ngati Porou, an acknowledged master of the art of haka was asked on his death-bed, “What is the art of performing haka?”. He replied: “Kia korero te katoa o te tinana.” (The whole body should speak).

Another definition was provided by Alan Armstrong in his book Maori Games and Haka (Reed, 1964) as follows.

“The haka is a compo

sition played by many instruments. Hands, feet, legs, body, voice, tongue, and eyes all play their part in blending together to convey in their fullness the challenge, welcome, exultation, defiance or contempt of the words.”

“It is disciplined, yet emotional. More than any other aspect of Maori culture, this complex dance is an expression of the passion, vigour and identity of the race. It is at it’s best, truly, a message of the soul expressed by words and posture..”

One of the initial refrains which the leader of the haka utters just prior to everyone performing the haka itself is shown below. These words simply serve to remind the performers how to comport themselves when they do the haka. They should be shouted out in a ferocious and staccato manner, designed to instil strength and determination into the performers, such that they enact the haka with the power and force required.

Also essential to the art of haka are pukana (dilating of the eyes), whetero (protruding of the tongue performed by men only), ngangahu (similar to pukana, performed by both sexes), and potete (the closing of the eyes at different points in the dance, performed by the women only). These expressions are used at various times in the performance to lend meaning and force to the words. It is important to realise that haka are generally not uniformly enacted, with all participants acting in time. The best haka involve a good deal of spontaneity and creativity as the performers interpret the words and feel the power of the haka take hold of them.

There are several styles of haka. Ka Mate was originally of the ngeri style, a short free-form haka where the performers interpret as they feel fit. It is also performed without weapons, and is not therefore a war-dance as is commonly supposed. The peruperu is a style of haka for a war-dance. It involves weapons and is characterised by a high jump 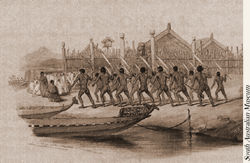 with legs folded underneath at the end. Observers of the All Blacks circa 1980′s through 1990′s will have noted that they often used to perform this same jump, which was a point of irritation amongst haka purists. However since the new millennium they have sorted this out. In fact the All Black rendition of Ka Mate has inevitably undergone quite a few changes along the way to make it more impressive or appropriate to the game of rugby or those doing it at the time.

The Origin of Ka Mate

It is said that circa 1820 a chief by the name of Te Rauparaha composed Ka Mate, the most well known of all haka. At that time Te Rauparaha was chief of the Ngati Toarangatira (Ngati-Toa) a branch of the Tainui tribe, and dwelt in Kawhia, north of the Waikato. Dating from a time some years before he was born, the son of chief Werawera, there had been inter-tribal war between the Ngati-Toa and the neighbouring Waikato tribe. It was a bitter story of constant skirmish, reprisal and territorial dispute. Growing up in this environment, with his father captured, killed and eaten when he was a young boy, Te Rauparaha became one of the most feared and respected warrior chiefs in Maori history. Later on he led his tribe South, and by 1828 was master of the whole coast stretching from Wanganui to Wellington, including Kapiti island, but at the time of composition he was in the thick of the action somewhere in the region of Taupo.

“Ka mate! Ka mate!” were the words uttered by Te Rauparaha as he hid himself in a kumara pit from his pursuing enemies, the Ngati Maniapoto and Waikato tribes. Fleeing for his life he came to Te Wharerangi and asked for his protection. Although reluctant, Te Wharerangi eventually agreed and bid him hide in a 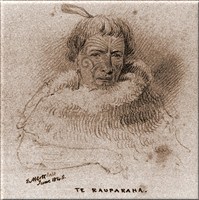 The first has it that no Maori male of consequence would ever put himself in a position where he would be beneath the genital organs of a woman. Thus the hiding place would be discounted by the pursuers. Of course Te Rauparaha was naturally willing to forego this custom in order to survive.

The second tells that she sat there in order to have a neutralising effect on the incantations recited by the pursuing Chiefs; the female organs were believed to have a shielding effect. As the pursuers arrived, Te Rauparaha muttered “Ka mate! ka mate!” under his breath (I die! I die!), but when the Rotoaira chief indicated the man they sought had gone to Rangipo he murmured “Ka Ora! ka ora!” (I live! I live!). However when Tauteka doubted the words of Te Wharerangi he gloomily muttered “Ka mate! ka mate!” once again. Then, when his pursuers were eventually convinced he was not in Te Wharerangi’s pa, and had departed for Taranaki he exclaimed “Ka ora, ka ora! Tenei te tangata puhuruhuru nana nei i tiki mai whakawhiti te ra!” (I live! I live! For this is the hairy man who has fetched the sun and caused it to shine again!).

The “hairy man” in the Haka in fact refers to the chief Te Wharerangi who gave Te Raparaha protection despite his wish not to be involved. Te Wharerangi is described as a man with more than his fair share of body-hair, hence the reference.

“Upane”, literally means a “terrace”, and probably refers to the steps which were cut into the side of the pit for access. Each “upane” in the haka represents the tentative steps Te Raparaha made as he nervously emerged from the pit to see if the coast was clear. One could imagine his joy at not only eluding certain death by a mere whisker, but also coming out of the dark kumara pit into the light of the day – “Whiti te ra! Hi!”

Going on from the kumara pit to the court yard of Te Wharerangi, before Te Rangikoaea and the assembled people, Te Rauparaha then performed his famous haka, which he had composed whilst in hiding. The variation used by the All Blacks is given below, together with the translation. Note that the words have been split in some cases to indicate the cadence of the syllables as the haka is performed.

The Words of Ka Mate

Note: the above pronunciation hints are simply a crude guide, and are not intended to be a definitive lesson in how to speak Maori!

The Words of Kapa O Pango

The Haka, the Silver Fern, and Rugby 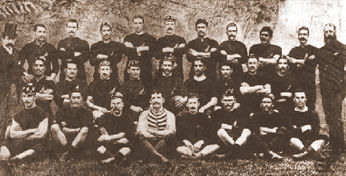 The first haka in an overseas representative rugby match was performed by the New Zealand Native Team to tour Britain in 1888-89. The drawing shown below originally came from Illustrated London News, and depicts the very first haka performed in Britain by a New Zealand rugby team. It is entitled, rather endearingly, “Their war cry before starting play”.

It isn’t clear whether or not it was Ka mate which they performed, but it is probable. At some venues they went to some considerable trouble to impress, bringing out mats and 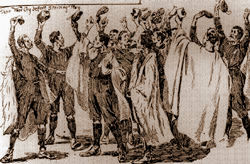 other items onto the field to complement the performance.

The team was not entirely composed of Maori, as many assume. The main organisor and instigator of the tour, Joe Warbrick added four pakeha players to the squad in order to provide a more balanced combination, and in the process renamed the squad from The New Zealand Maori Team to avoid misunderstandings. A fifth pakeha was also added just before they set sail, to don the jersey of Warbrick himself because of injury.

No discussion on the haka and New Zealand rugby is complete without mentioning that most powerful of kiwi icons, the Silver Fern. The Native Team was the first to wear a black uniform with the Silver Fern on the left breast. It also included in its ranks one of the founding fathers of rugby in this country, the legendary Tom Ellison whose contribution to the game subsequent to this tour was truly immense. 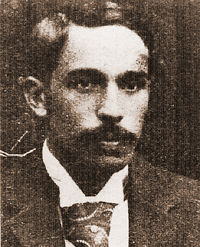 Ellison invented wing forward (flankers) play, conceived the 2-3-2 scrum, and authored that most famous of all New Zealand rugby books The Art of Rugby Football. His incisive and innovative mind was responsible for giving New Zealand a head start in the playing of the game and his thoughts on how it should be approached provided an impetus which is felt even today. Had he not suffered an untimely death at the age of 36, who knows how much more he would have done toward that end. In the 1890′s Ellison served as selector and administrator of the Wellington Rugby Union, and during the first annual meeting of the NZRFU, following its formation in 1892, he proposed a motion that the New Zealand representative team adopt the black uniform and silver fern. The rest, as they say, is history.

For further reading on the New Zealand Native Team and in particular this tour, I heartily recommend the excellent book Forerunners of the All Blacks, by Greg Ryan.

In 1905 the first ever officially sanctioned overseas tour by a representative New Zealand rugby side took place when “The Originals” visited Britain. It was on this tour that the name ‘All Blacks’ was coined, and that the first haka was performed by a team bearing that name. The two most distinctive features of the New Zealand team were thus instigated right from the very beginning.

The haka became a permanent fixture for the All Blacks from then on. An interesting little anecdote is told regarding the 1924 New Zealand team which became known as the famous “Invincibles”, due to their winning every match on tour. This team had as their most famous son, a young maori boy called George Nepia. He it was who led the All Black haka, in the first match against Devon on September 13th, 1924. The haka was enthusiastically received by the crowd of 18,000 who were then treated to an 11-0 All Blacks win, however a “prominent university sportsman” who attended was moved to write a letter which appeared in the next day’s paper. In it he asserted: “Cat-calls were quite uncalled-for”, and added: “South Africans do not open their games with Zulu cries!”. Obviously, this gentleman had never visited either country.

A Note to Travellers

To all prospective visitors to New Zealand, I would urge you to investigate the Maori culture which is very rich indeed. In particular make sure that you see a ‘genuine’ haka performance. The sheer passion and force of a well executed haka is guaranteed to send shivers down the spine!