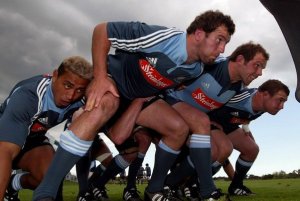 In the three years since the ELVs were first discussed at IRB headquarter in Ireland, we’ve seen them trialled in Scotland, South Africa and Australia, while here in New Zealand we saw them for the first time in the 2007 Provincial B competition. In 2008 we have seen them trialled at the highest level yet, in the Super 14 competition. Now that we’ve passed the halfway mark in the round robin part of the competition, it’s probably timely to take a look at the impact the ELVs have had on the game so far.

Keeping in mind that SANZAR wisely decided not to trial all the ELVsas they settled on the most obvious and, theoretically, the easiest of the ELVs to adapt to for both the players, referees and spectators. Thankfully they steered away from the more contentious ELVs such as being allowed to use hands in rucks, pulling down mauls and various lineout changes. So how have the ELVs we did adopt changed the game to date? I’ve used numbers from the ARU and some of my own stats from games I’ve watched over the past eight weeks to take a closer look.

For starters, despite some worries that the game would become a helter skelter running fest, it would appear that the time for ball in play has only increased marginally since last year (33 minutes in 2007 versus around 34 minutes in 2008), although it does depend on which teams are playing. Games between NZ and SA teams tend to see more ball in play (almost 37 minutes) than games between NZ and Australian sides. Perhaps something to do with NZ teams attempting to speed the game up against the bigger SA sides by electing to tap the ball from free kicks, but dominate the lesser scrummaging abilities of the Australian sides by taking the scrum option from free kicks.

Interestingly, there was more ball in play time (42 minutes) in the recent Six Nations test between Ireland and Wales, despite the staggering fact that 58% of points in this year’s Six Nations tournament came from kicks at goal. So even though southern hemisphere sides score more points via tries than kicks at goal, the ball isn’t in play for any greater length of time even under the ELVs. Therefore, that should dispel some of the myths that the ELVs will turn rugby into a running fest that only hybrid players will be able to cope with.

Additional concerns that the game might morph into something resembling league should also have been quashed, with the stats showing that there are more scrums per game under the ELVs. In fact, scrums (and good scrums at that) have become a very important feature of the ELV game. With both backlines now required to be 5m back from the scrum, we are seeing 25% of tries coming from scrums compared with just 19% in 2007. Any front rower worth his salt should be championing the ELVs, because if ever there was a need for good scrummagers it is under these conditions.

Locks may have some cause for complaint, because due to the ELV stating that when the ball is passed, put or taken back into the 22 a direct kick into touch will result in no gain in territory, there seems to be a bizarre phobia about kicking the ball into touch at most stages of the game. The number of lineouts per game has decreased as a result, down about 17% on 2007, and the number of tries scored from lineouts has shown an equivalent decrease. So whereas in 2007 the lineout was the set piece of choice to score tries from, this season it has become the scrum.

The number of turnovers has not changed significantly, there is a slight increase in ruck turnovers but only by a couple per game. There have been more tries scored from turnovers this year but that is probably less to do with the ELVs and more to do with the stark contrasts in the calibre of some sides to others given a few of the high scoring matches in the early rounds. The number of tries scored from quick taps after a free kick has been awarded has nearly doubled from around 8% to 15%, but the number of tries from general kicks in play hasn’t changed from the previous season. The number of passes and kicks per game has not dramatically increased either. Yes it’s true – despite what it seems there aren’t more kicks per game this year, just fewer kicks going out over the touchline.

Under the ELVs for all offences the sanction is now a Free Kick with the exceptions of offside, not entering through the gate, and Law 10 Foul Play. Accordingly there has been a decrease in the number of penalties and an increase in the number of free kicks awarded . Hardly rocket science to figure that would happen. But while things seemed to work quite well for the first couple of rounds under the free kick system, eventually teams cottoned on that you could slow the ball down at the tackle and only concede a free kick – and once again the breakdown turned into the same old disaster area of confusion it had been under the old laws. Somewhere along the way the concept that cynical and clearly obvious offending (i.e. Law 10) should be penalised was lost in ELV translation during the early rounds of the competition, but since Round 5 we have seen a harder line from most referees and thankfully we are now seeing penalties awarded for cynical play and yellow cards dished out for obvious and repeat offending.

The push to trial the ELVs started back with the IRB in 2005, the main driving force behind it being to make the game simpler and help the referees. Yes, you read that correctly. It was an IRB initiative and the whole idea was to make on-field ruling a simpler task for the referees. So it’s been disappointing to hear rumblings from the northern hemisphere about the ELVs, such as comments last month from Gareth Davies where he suggested “in adversity, the disappointing response from the southern hemisphere is a clamour to change the laws of the game – not to get to grips with the real problem. It is clear for all and sundry to see that Australia need to focus on a solid foundation from which their creative and talented backs can launch themselves, not a needless obssession with tinkering of the laws”. Well back the bus up, Boy-o. With all due respect, if the nothern hemisphere actually bothered to take a closer look at how the game is developing under the ELVs they might discover that a solid foundation in the form of a decent tight five anda strongscrum is exactly what you need under the ELVs – if not more so than under the old laws.

Where the IRB go from here is anyone’s guess. The one thing the ELVs have shown thus far is that they are not making rulings at the breakdown any more clear cut for referees than under the old laws, and once again it comes back not to the laws themselves but how well they are policed. Until the IRB can sort their referees out and get common consistency in rulings between the two hemispheres, they can probably tinker and change the laws until the cows come home, but equally coaches and players will forever be trying to find away around them. Some of the ELV changes are sensible, such as changes to the quick throw-in, and not kicking out on the full from a ball carried back into the 22. I personally like the backlines 5m back from the scrum, some people hate it. Other changes in the game still remain a grey area. So we shall continue to watch the ELVs for the duration of this Super 14, but something tells me that this may be the only time we will see them played at an international level.