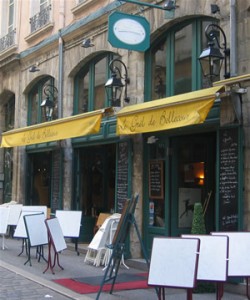 Unfortunately my brief time in the beautiful city of Lyon is at an end, and I don’t mind saying that despite France being a desperately frustrating country to be in at times, I was very reluctant to leave Lyon.  Other than the trumpets, that is.  I’m not sure how well the small brass bands complete with drummer come across on TV, but they are a regular fixture at French grounds – and if you’re really “lucky”, sometimes you’ll get two of them at either end of the field.

Now I am not a fan of brass at the best of times, and frankly despite it all being very Latin and with loud yells of “Ole” coming from the locals at the appropriate moment following a blast from the trumpets, I will enjoy being in Edinburgh this weekend well away from anything brass.  Not to mention the elusive sole trumpeter who would appear frrom seemingly nowhere at the traffic lights outside my Lyon hotel and blast out a frenetic volley before disappearing again.  As far as I’m aware, this went on pretty much throughout the whole day for the three days we were in Lyon and for the life of me I still don’t know whether he was busking or just a random lunatic, but I am done with the trumpets for the time being!

I dined out with some new friends in the well known Brasserie George in Lyon, a large and bustling restaurant with a staggeringly big menu that made choosing your food quite a hard mission. The brasserie features a live jazz band and one of the specialities of the house is Baked Alaska (although you need to order it at the start of your meals if you want it for dessert).  If it’s your birthday they put sparklers on top of it and when the waiter whisks it out to your table they dim the lights and the band launches into Happy Birthday.  The first time it happened that evening all the French patrons started clapping loudly in time to the music and a huge cheer went up when the dessert reached the intended table.  We were quite amused by this, and lo and behold when a few minutes later another one came out, once again the lights dimmed, the band played and the people clapped.

By the time the third one came out we had got with the programme and joined in with the clapping and whistling.  But then everyone started getting Baked Alaska with sparkler candles (I cannot believe that so many people could possibly have had a birthday on the same day in the one restaurant) so the fun began to wear off – the band started getting bored with the same birthday ditty and started doing variations on the Happy Birthday tune and the clapping got very half hearted.  Of course, that didn’t stop us from nominating one of our table as being “the birthday boy” and we did manage to get a sparkler on top of his gateau – and although there was no dimming of the lights or the band playing Happy Birthday it still didn’t ruin the fun.

It’s not really until you are away from home that you realise how globally recognisable the All Blacks brand is. I have been constantly amazed at how many other nationalities are supporting the All Blacks at this tournament -  we had touring American backpackers turned up at our hotel complete with All Blacks face paint and flags last weekend.  I’ve already mentioned the numerous French who are decked out in black, but there are Irish, English, Norweigans and many other nationalities also turning up especially to watch the All Blacks play.  When you get into a taxi or you’re in a restaurant, cafe or bar in France, as soon as people find out you’re from New Zealand the first thing they say is “ahh, ze All Blacks!”.

Now I’m in London for the week leading up to the game against Scotland in Edinburgh, and it’s been very amusing reading the British press slamming the England team following their drubbing by South Africa on Friday.  There are even calls from the likes of Stephen Jones for a Southern Hemisphere coach to be found.  I never thought I’d see the day!