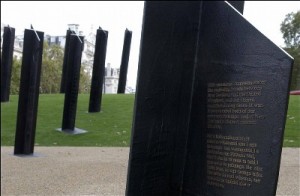 It’s been a bit of a comedown being in autumnal London after the balmy, late summer weather in the South of France. Bu there are always things to do and see in London, one of which was to visit the New Zealand War Memorial at Hyde Park Corner – quite a neat piece of Kiwi-ness in the heart of London City. I must say it was an almighty achievement to get that position for a piece of NZ too. Among the many plinths that make up the memorial is one sporting a rugby ball, commemorating CJ Munro who introduced the game to New Zealand upon his return after completing his schooling at Christ’s College in Finchely for two years. Bless the man.

British newspapers are always an amusing read during a Rugby World Cup, and by and by they haven’t disappointed – though the English team are probably quite relieved that the Northern Rock Bank financial crisis and the “sacking” of Jose Mourinho from the manager’s job at the Chelsea Football Club have overshadowed their appalling loss to South Africa in Paris the other week. The All Blacks did manage to get some praise from Stephen Jones though, for their on-field attitude against Portugal in Lyon. Crikey, what is the world coming to?!

This last weekend gone I got first hand experience of that wonder known as British Rail and can now see why people whinge about it so much. We had 1st class tickets, but may as well have been in cattle class both ways as on the way up they had no power in the kitchen so there was no hot food nor

complimentary tea and coffee for those in 1st class. On the way back we were supposed to be able to use the dining car but within minutes of it opening (it was 5 carriages back from the 1st class carriages)

it was full and they wouldn’t take any more seatings so most people travelling in 1st class missed out on a meal. How does that work?

The train trip up was great fun though. The carriages were mostly full of Kiwi supporters on their way up to Edinburgh for the game so there was plenty of banter and lively discussion for the first half of the journey. The second half of the trip saw most of our carriage gathered around one set of seats where one of the guys had a small, portable TV set to view the England-Samoa game. Unfortunately, every time the game got exciting we would round a bend in the track and lose coverage so it became a combination of someone on a mobile getting updates from a mate watching the game on TV back in London combined with brief glimpses of play between the snow storms on the screen. Possibly the best moment of all though was pulling out of the station at Newcastle where some fully fledged train spotters were out en masse doing their Saturday morning surveillance of the trains going in and out of the town. You have to see it to believe it, but they fully live up to the stereotype.

Edinburgh itself was an interesting experience. Chocka with an influx of All Black supporters the restaurants were bulging at the seams and you were hard pressed not to have anything shorter than an hour wait for a table even as late as 9.30pm. Breakfast the next morning wasn’t any easier, as nothing opened for on the Sunday morning (day of the game) until midday. We went to four cafes and were told that they weren’t doing breakfast until noon before we found somewhere that was. Then this morning (Monday) when we went to get breakfast, the places advertising “All Day Breakfasts” stopped serving them at 10am. How does that work again? Since when did All Day only include the hours that are single digit? Not to mention two places had run out of bacon. How gormless are these people when they knew there was a World Cup game and a huge influx of tourists to their city? There were countless numbers of Kiwis roaming the streets with slighty bemused expressions on the faces looking in vain for something, anything to eat. (Hmmm, maybe that’s why Fat Bastard ate babies…. it was all he could find!)

And cold! It’s only the beginning of their autumn and the wind in Edinburgh could cut you to the bone. Yet while I was wrapped up in coats and scarves (and keep in mind Christchurch where I’m from isn’t exactly the Riviera itself), there were local folk walking about in t-shirts. They’re either tough as boots or lunatics. On the plus side, they do have fantastic black pudding in Scotland. And the

people are friendly even if you can’t understand a word they’re saying when they get excited – or with some even when they were talking normally.

This week I’m looking foward to getting back to southern France and the warm climes of Toulouse, known as the Pink City, to watch the All Blacks take on Romania in the last round of pool games. The main mission is going to be making sure I get there in time to watch the England-Tonga game on the Friday night, which will determine the runner up of Pool A behind South Africa. The English are pretty worried about this game, and the way Tonga have been playing and the fact this game is being played on French soil they are probably right to be worried. There are a couple of other must-watch games too, those being the Scotland-Italy match that will decide who comes second in our pool, and most importantly the clash between Ireland and Argentina that will not only decide which of the two teams goes through but also determine who the All Blacks will be playing in the quarter final game in Cardiff.

So much rugby, and thankfully this coming weekend so much time to watch it all!