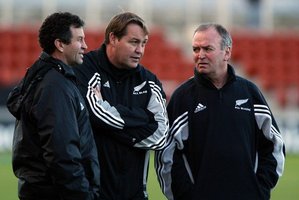 Hookers: Mealamu and Hore
Elliot was chosen for the EOY tour but he hasn’t shown anywhere near that form in 2011, and if you factor in his (rumoured?) personality I wouldn’t be surprised if they go back to Flynn.

Props: Woody, B Franks, O Franks, Afoa
With specialist injury backup from Whopper at loose-head. It’s hard to know who the backup tight-head would be. Tialata isn’t in the starting XV for the Canes currently and would need a personal trainer and a rocket to get him properly aerobically fit while in camp, and none of the others particularly appeal.

Locks: Thorn, Whitelock …
Probably Boric next, with Donnelly and maybe Ali Williams scrapping for the last place. The Blues play the OH twice in the latter half of the season which should help sort things out.

Loosies: McCaw, Kaino, Read, Todd, Messam
I think the selection of Braid last year signals they will take a backup specialist openside. This is where compelling form may lead to some changes and unless Braid plays out of his skin in the next few weeks I can see Matt Todd being included in the TN squad so they can have a closer look at him. What Braid gives that is important is leadership and experience which may be important for the wider squad seeing as the player selected here ain’t going to play much during the tournament. The last loosie place is still open – I’ll stick with Messam (EOYT) for now

Halfbacks: Weepu, Cowan, Ellis/Mathewson
Weepu is the key at HB – if he’s half fit they’ll take him. Cowan also and then a toss up between Ellis and Matthewson.

First Five-eighth: Carter
Carter only at first 5 with backup from McAllister and Weepu.

Centres: Nonu, SB Williams, Smith and McAllister
Nonu and SBW to fight for the starting position, McAllister sneaks in for his kicking game and ability to provide bench cover. I don’t know his exact placekicking stats but he seems to be kicking as well as anyone in the country and that’s whats going to matter in the big games.

Back Three: Mils, Toeava, Gear, Sivi, Jane and Dagg
Mad Peter de Villiers has suggested SA will be playing a forward based kick and territory game at RWC so ability under the high ball, and a kick-return game are going to be must-have skills for the back 3. So I’m leaving Fruen and Maitland out. Rokocoko needs to show stunning running form to make it so he’s out too.

Which interestingly is only 5 changes from the EOYT squad:

Where ‘*’ denotes a player change.