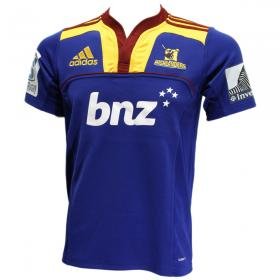 It’s a funny concept, tradition, when you think about it. It’s just something people like doing, or having, which lasts for a long period of time. The longer it goes, the more significance it accrues, like the proverbial stone gathering moss.

If it goes long enough then everyone associated with it draws from it. It gets woven into the fabric of peoples’ lives and can even take on a kind of life of its own. A great example is the Ranfurly Shield (itself threatened in the past), both the trophy itself and the format of the contest for it.

Of course we’re talking here about the hotly debated decision by the General Manager of the Otago Highlanders, Roger Clark, to dispense with the Highlanders’ colours of blue, maroon and gold, a decision which, judging by his comments, has been driven at least in part by some back-room brainstorming by a bunch of marketing droids.

But let’s step back a bit. Roger Clark seems to have the best interests of The Highlanders at heart. He basically wants them to play well, possibly win some trophies, and be financially secure. When he came along they were playing crap, and fallen halfway down the dunny (apologies to Dunedinites) in the money department.

On the playing front, you have to give him full marks. The Highlanders have been a revelation, so credit where credit’s due. But it’s the rest of the strategy which lets it all down.

Having been put right on the back foot by the storm of outrage over the jersey change, he has made some statements which bear review here. Try to spot the deliberate mistakes in this little lot (excerpts drawn from this Otago Daily Times article):

Mr Clark said to attract fans and continue the impetus of
change, research had shown a new jersey would be an appropriate
move.

“We needed to change everything and that includes the jersey.
We are really conscious we are going into a new stadium
next year and we want to help showcase it to the world”

“We want to signal that we are changing right across the board.

“If we wanted to grow the fan base then we had to engage with
the whole region.”

The phrase “research had shown..” is a bit of a give-away. Instead read that as “the marketing muppets we paid too much money to recommended that..”.

Obviously no research was done. If it had it would have discovered what the ODT poll did in a single fucking day!

The trouble with marketing people is they are linear, short-term thinkers. Their World is one where you make a stimulus to get a reaction and if that doesn’t work make some more. Tradition has no place in that World.

Look back at the excerpts above. The old adage “throwing the baby out with the bathwater” comes to mind. Roger, bless him, affects to want to “grow the fan base” and “engage with the whole region”. Well Roger, the jersey you are chucking out has colours drawn from the rugby teams across the whole region. And you don’t grow your fan base by disrespecting the jersey all the existing fans have been supporting since 1996.

Which brings me to the final point. This quote from Roger:

“The Highlanders’ new playing strip is not an insult to past
teams, as the side does not have a tradition”

When I read that I couldn’t believe the General Manager of the team could come out with such an outrageous statement. That’s the same as telling all of the fans which have supported The Highlanders over the 15 years of Super Rugby history that they’re nothing, they didn’t exist.

And what did Roger Clark imagine would happen when he announced that the team would be chucking that jersey away and running out in some hideous green creation inspired by some random marketing pratt’s wet dream? A brief thought as to what the Black Jersey the All Blacks wear means to us should have been enough to remind him that, yes, fans DO relate to a jersey, and they DO care about it and invest emotional ties in it.

And yes, 15 years of a jersey created with 120-plus years of rugby tradition in the region behind it does matter.

Now it’s down to Roger Clark. Will he accept what the fans are telling him, or will he ignore them?

I hope that this green abomination gets thrown in the dumpster. You can’t buy tradition, or manufacture it, but you can trample it into oblivion.